All Aircraft Take Off and Landing Speeds (Version 19.1)

I have finished calculating aircraft rotation speeds in all aircrafts. I was doing it all slowly where had minor activities throughout the day, but managed to finish the rest. I hope you enjoy the full list. 😄

This is very helpful. Thanks for posting!

That is awesome! Just earned my second golden badge! Thank you everyone for the support! ❤️ 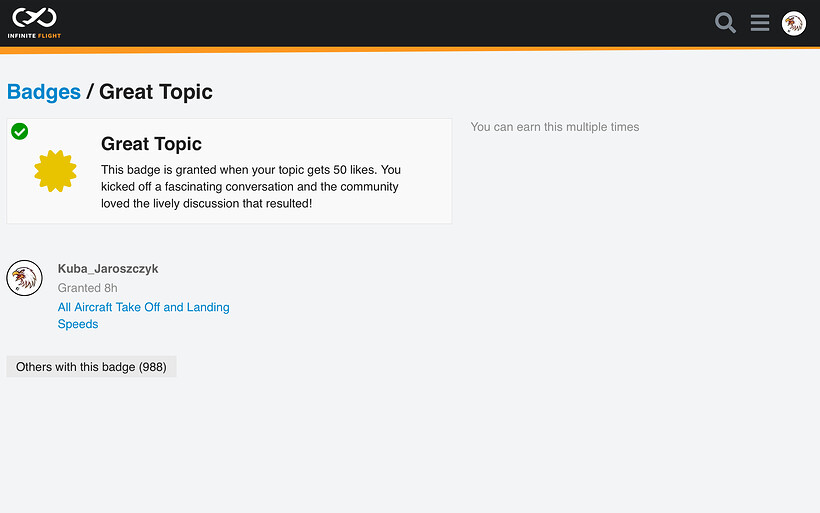 I’m almost certain that the A320 and A380 takeoff speeds are both 150 knots. I know I doesn’t sound right due to the size difference but if you really want to know, go read QF32 as Captain Richard Champion de Crespigny explains the two aircraft in great detail.

Or how about you use the actual V speeds for the aircraft instead of incorrect gross overestimates. I know for a fact from the actual V speeds I have collected from actual SOP books I have found that the A321 at a middle normal weight for take off is over 140kts. This chart you have is extremely off.

I’ve attached a correct link from my own personal collection of the V speeds that I use for every flight for my aircraft on IF. I have verified them and they are accurate as they all come, as stated above, from actual SOP, and not some VA SOP but an airline SOP. Some are missing complete data such as the 747-400/8 and for the aircraft with no soft rework you can expect some struggle getting off the ground due to ground effect not being implemented on the model.

I’ve always known to have flaps configured at 10 or 15 for takeoff.

Yep, that sounds interesting. I already had that in mind already. But I have there is something to point out.

Ive verified that the Vr speeds from my spreadsheet match those in IF. The only differnce may be the amount of trim you need. These are all tested and was compiled back when I was beta testing IF-A and was going to proactively compile V speeds for a V speed callout being automatic and not user inputed. Once again these all work in If and would be more beneficial to use the spreadsheet than averages where some are off by 10kts

Alas…It appears that you have left the C-17 off the list… but only mostly GAF pilots know how to fly that anyway…at least until it is eventually reworked !

Thank You for your hard and long work to record these base parameters for new people to use to learn.

Brilliant, thank you so much for the hard work and time you have put in to produce the information.It’s a very use tool to have around

So here’s what I’m working on next: automatically import V-speeds into IF-A for your current aircraft! [340 Likes, 31 Comments - In-Flight Assistant (@inflightassistant) on Instagram: "Here is what I am working on today: automatically fill in the V-speeds for your aircraft given its weight and current flaps setting! Note that normally you’d also have...] The speeds I will be using will be hand-picked and tweaked based on various data sources including the community sheet I started a while bac…

I’m finally getting around to this feature - and yes, Android will have it, as well!

@Kuba_Jaroszczyk Huge props to you for this data in your post, for the most part this looks about right to me! Very helpful stuff.

my own personal collection

You mean the file from this topic, that was created by @epaga, which several people, including you and myself, worked on?

Hey everyone, as many of you know, my app In-Flight Assistant lets you set V1, V2, and VR speeds so your “co-pilot” calls them out during takeoff. I’ve had quite a few requests to provide a calculator in the app to let you know what those speeds need to be, but the problem is that the formulas for calculating them are quite complex and often are an airline’s secret business knowledge. So, I had the idea - what if we slowly but surely “crowdsourced” the values for all the airplanes in IF by exp…

Thanks for the kind words. I may have to redo some aircrafts to improve its stability in flights. For now these weights work perfectly when taking off. 👍

This is the sheet people added by testing on IF but is different results as when I was helping beta test I was getting the information from the actual flight manuals. I discussed this with you at the time as peoples IF testing was wrong.