Aircraft Suddenly Speed Up Whilst On Autopilot To "OVERSPEED" During Cruise

Not sure what just happened but i had to end my flight to avoid getting a violation as my plane suddenly decided to speed up whilst autopilot was engaged whilst flying steady and level at FL390. Not sure what happened as my autopilot was set to mach.85 but the plane just went crazy.

It could be a variety of things, from wind, to even just how you climbed. Is it possible to share your replay so we can try to get a better look?

The climb can be ruled out since id been flying at 390 for a good 7 hours. But yes ill share it

Watching it, it appears that it could’ve been either a gust of wind, seeing how jittery the speed is, or the sudden bank increased speed beyond the limit. It’s hard to tell, however that’s just my findings right now.

Yea this can happen, it’s not the autopilot it’s the winds.

Every like two or so hours the game updates the winds so they mach real time. The way you are flying is known to have strong winds to the south from the north.

I found the winds yesterday from the time of the recoding below. I did my best to ping where you were at the time and the altitude of the winds. 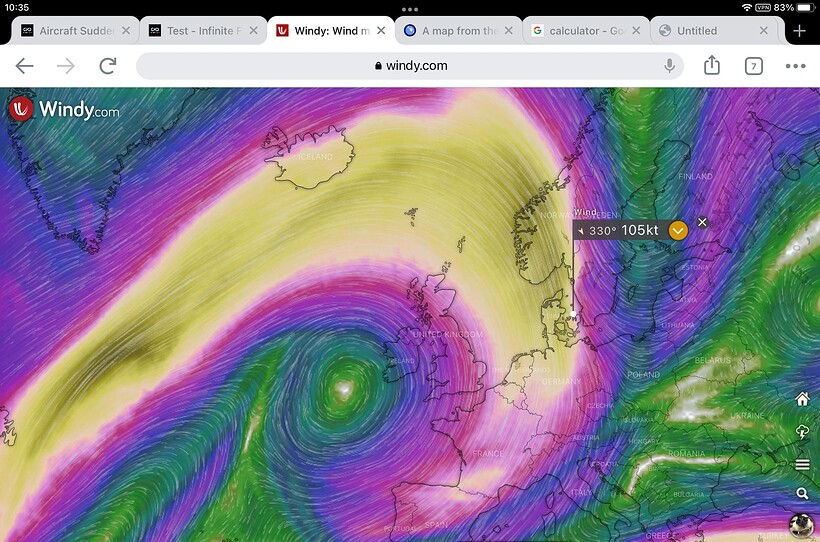 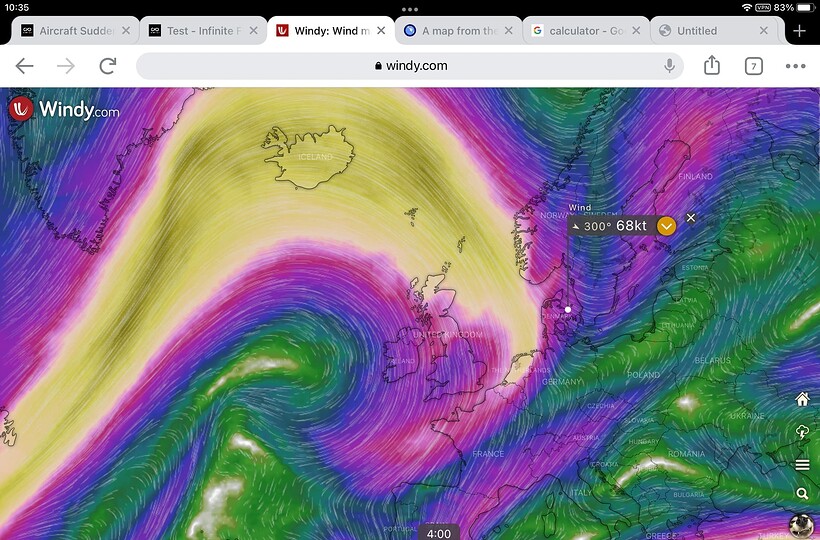 A 40kt different would definitely be enough for the autopilot to be caught off guard and not be able to keep heading/speed for a short amount of time while it corrects.

This has happened to me too but I’v found its more common for this to happen when descending. Thats my best guess any ways.

We can’t see info on your winds in your video. But beyond that there are some real curiosities.

If you are on autopilot, why is the airspeed bug completely absent from your IAS strip? It should look like a triangle, that should be at the same place as your current IAS before the acceleration.

Even more bizarre: Before you zoom in, on the right display, the wind data is showing dashes rather than numbers, from it’s usual readout below GS. And your TAS is shown as zero!

Because its in replay mode

Thanks for the explanation. That makes sense. I see that now, testing it out. And I also see replay mode doesn’t seem to have any direct recording of what the wind was(?).

But when I set up a cruise in solo mode and then turn the wind slider speed up abruptly and go back and have a look:

1)The acceleration arrow appears alongside the sudden change in IAS, just like in your case.
2)The sudden bank occurs, also like in your case, due to the aircraft’s delay in accelerating into the wind’s cross component speed (no sideways force when you’re established in a steady cross wind, but there is a sideways force when wind changes suddenly, as you accelerate laterally into the wind drift)

Autothrottle you’d expect to react immediately. The power setting on the engine power indicators does appear to be captured in replay, as well as the power setting bug, which you should see the autopilot decreasing rapidly to decelerate out of the abrupt overspeed.

Do you see the change in power adjustment? I couldn’t see it from your video. But I also don’t seem to see the expected sudden deceleration indicated by the acceleration arrow on IAS? (maybe the view of it at end of video was too short?)

If that last point can be verified, deceleration from AP throttle down. Then I think it likely confirms a sudden change in wind. In the past, I have experienced, while watching, wind changes overtaking my auto throttle’s ability to keep up (only once though).

If you were to share the actual replay file, we could look closer at it :)

sharemyinfiniteflight.com is a good resource for that.

He did share it, on youtube. That’s what I was looking at. It just needs that extra bit of detail.

Yes, but there’s additional information in the replay :)

Right, I assumed that’s what you meant. Thanks.