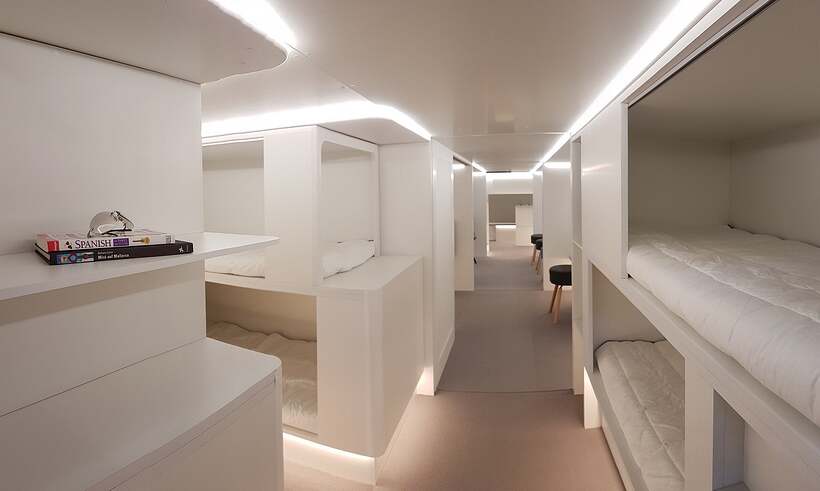 Airbus Unveils Cargo Deck Sleeping Compartments With Up to 24 Bunks - The...

Airbus and Zodiac signed a partnership to create sleeping compartments and living space on the cargo deck — and airlines are already interested.

Airbus announced the start of a new program concerning cargo hold sleeping compartments at the Aircraft Interiors Expo in Hamburg, Germany. These compartments will be installed on A330’s to start because about 150 of them already have existing stairs to the crew rest area. Unfortunately the height of the compartment is only 5 feet 4 inches.

This would be a very interesting add on to the economy class experience, but it could potentially take away from demand for J.

I gotta admit this is pretty cool and am interested to see how successful it will become and whether or not airlines will implement this for either their crew or passengers.

Do you think this idea will be able to be implemented successfully?

That is actualy really cool

I never knew cargo holds could hold sleeping quarters! I wonder how this will turn out. Hopefully the plan is successful.

I think it all depends on how much they charge for the privilege. For economy at least

I think that they would not let economy in there. Because remember they can only put so many in the hold. They still want space for cargo and luggage. My gues is that it would be first passengers and some buisines pass who pay extra or have very high status on the airline.

5’4 in height? Even an Oompa Loopma couldn’t fit in that space! Imagine anyone over 6’0 trying to walk around those quarters.

That is true but even if I was 7 feet.( I’m not I’m 5’5) I would suffer to get to my quarters to sleep. If it was on those 18 hour flight. I’d definitely suffer the 20 seconds it takes me to bend over

Why do business class passengers need to have access to this? They already have a lie flat bed…

It could either be a extra to. Or Airlines can make a really really comfertable not fully reclining seat and save some space and use the under cargo hold for the beds.

Yea that will never happen. No point whatsoever if the bed is already a part of the seat.

your definitely right. But I was just making a theory to make the beds in the cargo hold plausible.

The thing is the cargo hold beds are already ideal for economy passengers.

I think that this is partially to sway the Qantas ULH in favor of Airbus. Provided Qantas is between Airbus and Boeing to be able to get from Sydney to London direct, and have expressed in the cargo hold passenger space it seems like a tactical move from Airbus to sway the order.

I don’t get why they’re adding this on A330NEO first. Seems that it will only really be practical on A350ULR. Just my 2 cents.

Just because a plan sounds perfect doesn’t mean that it comes together perfectly. Like for instance a flight from NA to EU: The plane lands at Madrid at 8:00 am. If some passengers are still asleep, then won’t they be scared by the touchdown on the runway because there are no windows?🤷‍♂️

I agree. Although I gave some ideas of how it could work I fell like a little far fetched idea. Though I will give it a chance. :)

They would not be still asleep. If flight attendants make you put your seat up 2 inches then there is no way you would be allowed to sleep after descent has started…