Airbus Helicopters began testing a diesel engine back in 2016 and Airbus claimed it was successful. Test results have been analyzed and the program was a technical success, Airbus claims. However, an application still has to be found, as no engine manufacturer has picked up the work yet. If Airbus produces an engine like that, it would not only be more fuel efficient but also allow the helicopter to fly longer! 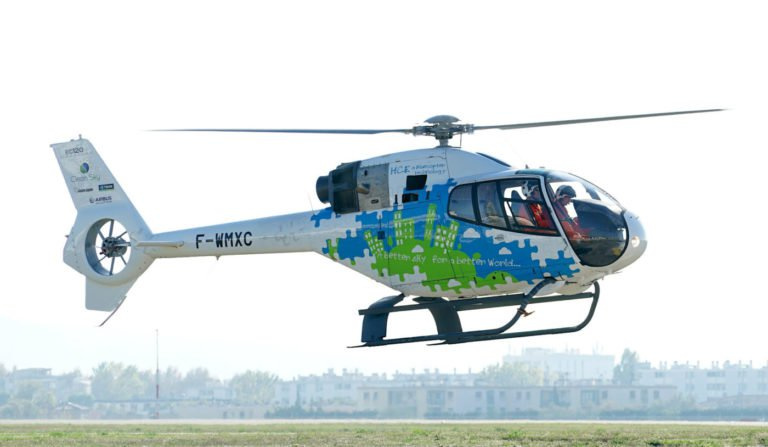 In the framework of a European research program, Airbus Helicopters in 2016 completed a flight-test program with a diesel engine — with test results deeming the program a technical success.

That’s pretty cool but how does aviation fuel differ from diesel fuel? is it cleaner?

Jet-A is a relatively high sulfur fuel, diesel is low sulfur and EPA requirements are getting more stringent about sulfur in diesel every year. After all, we are now in the Ultra-Low Sulfur diesel era. Using Jet-A in your truck will be highly frowned on by your EPA inspector and could lead to fines.

Jet-A is “dry.” Diesel is made in such a way, or additives are mixed in, to lubricate the injector system of a diesel engine.

Jet-A is closer to kerosene and Diesel #1. Most modern diesel engines specify Diesel #2.

The viscosity specifications for the two fuels is different. Jet-A and Diesel #1 tend towards lower viscosities than Diesel #2. Lower lubricity is likely as the viscosity decreases. This may not cause catastrophic instant damage, but it may cause long-term wear of pumps, injectors, etc.

Cetane number. Diesel #2 is manufactured with a required cetane number. ASTM D975 specifies a minimum of 40. Most Diesel #2 in the U.S. is 42-45. The ASTM specification for Jet-A, ASTM D1655, has NO minimum cetane rating, because cetane pertains to compression ignition engines, and has no meaning in turbine engines. Using a fuel with too low a cetane number in a diesel engine will just result in a rough-running or not running at all engine. This is why Exxon required pilots of Diamond aircraft with Thielert diesel engines to sign a liability release to fill up with Jet-A at Exxon airport supplier

Longer flight can’t be bad for you all in Alaska, you must have a lot of long range flights that could benefit…

No it would help a ton!
I mean taking the 412 to Nome from ANC we had barely enough to make it with ferry tanks. An engine that would use less fuel and allow us fly longer would be awesome!

Sound like it! Hope this comes to market for you all! (And many others)

This is interesting. The US Army’s M1 Abrams tanks runs a 1,500hp turboshaft engine that can run on Jet A and Diesel fuel (including heavy marine diesel). Considering that engine is made by Lycoming’s turbine engine division who even fielded a modified version of the Abrams tank engine for use in some military helicopters (and lost the contract to GE), I would imagine Lycoming might be able to take up the production of the engine for Airbus. However, Lycoming is owned by Textron which owns Bell Helicopters, so guess that would never work out.

The M1 is different then a helicopter lol When I was Army everything ran on Jet A or similar to it, Think officially its Jet B. But our Humvees also ran it.

Isn’t diesel absolutely horrific for the environment? It’s more efficient but has much worse emissions

Not so much today. There have been so many great strides in the production and use of diesel. Especially with today’s emissions systems, diesel is actually quite clean.

This is the major downside with diesel engines:
Diesel engines produce a lot of nitrogen oxide (NOx) and it’s a health hazardous gas that among other things, irritates the respiratory systems and is particularly dangerous for people with allergies and asthmatics. Those who breathe in nitrous oxide may suffer from headache, nasal congestion and nausea. Yes, it pretty lethal long term.

So the whole deal about diesel being clean is just not true.

Diesel is cleaner and in the long run more cheaper to operate. It’s also more efficient then gasoline. Cessna has a couple of diesel engines I believe it’s lycomming and they run extremely well only issue is when it freezes same as the diesel lol