Aerovías de México, S.A. de C.V. operating as Aeroméxico, is the flag carrier airline of Mexico based in Mexico City. It operates scheduled services to more than 80 destinations in Mexico; North, South, and Central America; the Caribbean, Europe, and Asia. Its main base and hub is in Mexico City, with a secondary hub in Monterrey, and focus cities in Cancún, Guadalajara, and Tijuana. Aeroméxico Headquarters Building is in the financial district on Paseo de la Reforma overlooking the Diana the Huntress Fountain.

Grupo Aeroméxico includes Aeroméxico mainline and Aeroméxico Connect (regional subsidiary). The group held #1 place in domestic market share with 36.6%, and #2 place behind American Airlines with 15.3% of the international market share, in the 12 months ending March 2014, becoming Mexico’s largest domestic airline group. Aeroméxico is one of the four founding members of the SkyTeam airline alliance, along with Air France, Delta Air Lines, and Korean Air.

Aeroméxico works closely with the U.S. carrier Delta Air Lines, which owns part of Aeroméxico and in 2015 announced its intention to acquire up to 49%. On 8 May 2017 a joint commercial agreement (JCA), came into effect, whereby the airlines share information, costs and revenues on all their flights between the United States and Mexico.

Aeroméxico, the largest global airline in Mexico, announced the presentation of Aeroméxico Contigo, a product that provided various benefits to passengers residing in Mexico or the United States, who for various reasons traveled frequently between both countries.

The configuration of the Boeing 737-800 aircraft that were used to make the Aeroméxico Contigo flights allowed to optimize operating costs, which translated into more attractive rates for customers. They also had more space between seats thanks to the interior of the cabin of the aircraft, as well as a special service in the Call Center and personalized attention at the documentation counters at the participating airports.

The airplane is now active flying for Havana Air leased from Swift Air. 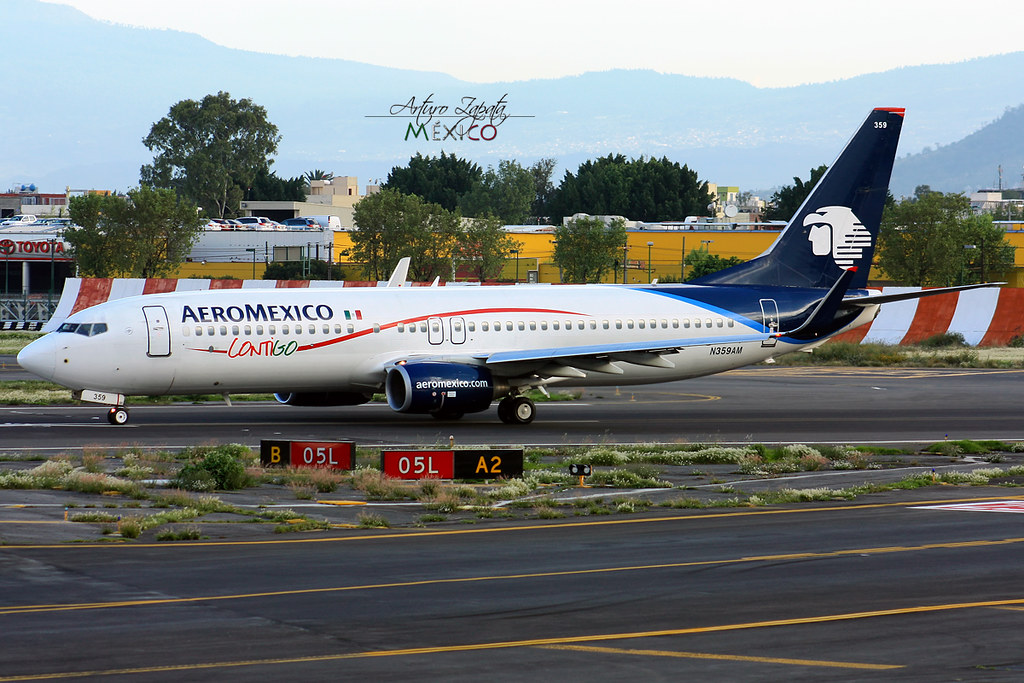 Aerovías de México, S.A. de C.V. operating as Aeroméxico (stylized as AEROMEXICO), is the flag carrier airline of Mexico based in Mexico City. It operates scheduled services to more than 90 destinations in Mexico; North, South and Central America; the Caribbean, Europe and Asia. Its main base and hub is in Mexico City, with secondary hubs in Guadalajara and Monterrey, and focus cities in Cancún and Tijuana. The headquarters is in the financial district on Paseo de la Reforma, formerly Grupo Aer...

From my eyes I can only see extra stripe and the words Contigo,
would you mind adding a bit of information on what Contigo means and why the livery is special?

I’m a big fan of AeroMexico but this is just too boring to be in IF. I’d rather have the Quetzalcoatl or the ones with a pyramid on the side.

Nice livery, but I think the FDS said something about not adding special liveries to IF.
(Besides the Boeing 717-200 AirTran Atlanta Falcons)

I don’t think they’ve said that. Because we do have that KLM Orange pride and that was very recent update.

I must have been hallucinating in that case, or they said sports liveries. :-|

“Contigo” means “With You” and is a travel program for US citizens and Mexicans who travel frequently between this two countries. That’s what I know until now.

This livery on the Boeing 737-800 looks simply stunning !

This is a very nice-lookin livery! I especially love seeing the B738 with the splits!
There’s just too many important things to vote for right now though, so I’m out of votes…
Sorry.

Since your suggestion differs in some livery details from this topic, you could create a topic for that livery of your photo if no one has created it yet.

Yes please 🙏🏻 Hopefully we will have it in the next update, let’s be positive:)

Im going to vote for this!
I Ike it because it’s different and I love Aeromexico!

It would be unfair if American Airlines gets many liveries a not Aeromexico, I definitely support this livery!