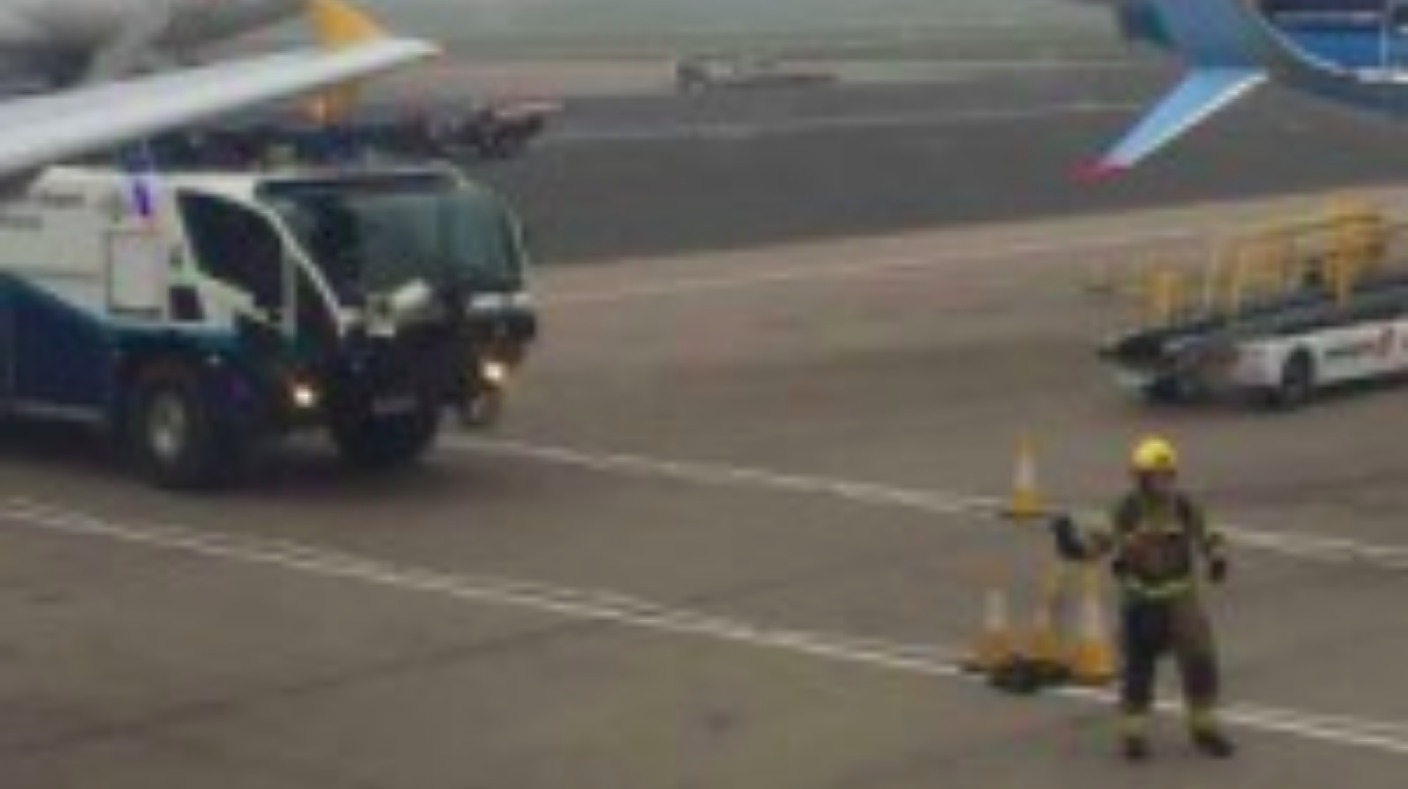 A pilot was force to abort a take-off at the last minute at Birmingham Airport as the plane was preparing to take off. Passengers said the Monarch flight's front wheels had already lifted off the floor when the plane came to an emergency stop.

Nose gear already lifted?? Then it’s way too late to abort a takeoff… 🤔 Wonder what the reason was!

Did they reach V1 yet

Anyway to the thread it’s a good idea that they decided to stop. When people say when above V1 takeoff no matter what, I find ridiculous. Good pilot’s, had they continued there may of been another air france 4590

If the nose wheel was off the ground, it’s past V1

V1: The speed beyond which the takeoff should no longer be aborted

Wonder if flugsnug was spotting when that happened. Be interesting to get an idea of what the distance covered was.

One of the plane’s engines was allegedly overheating. It had passed V1 and Vr, but assume it hadn’t reached V2 yet. What do you do? V2 is the The speed at which the aircraft may safely be climbed with one engine inoperative, but the space in between V1 and V2, what do you do…?

Here is my unsolicited opinion; if the issue was one of an engine became inoperable, lifting off after V1 seems like a risky choice. That said, the ultimate authority is the pilot flying and she/he brought every one of her passengers back to the gate safely. Now, perhaps the length of the runway way such that they knew they would be able to stop the takeoff but nevertheless there is case history to support not aborting takeoff at or after V1. My conclusion being that there will need to be a deep look at the events of this RTO and the way “unflyable” is defined for the purposes of post-V1 abort.

I think something is possibly being overlooked with the whole V1 thing. The plane is either an A320 or A321. I can’t be bothered to figure out which exact plane it was at the moment. But in any case, assuming that the aircraft wasn’t close to MTOW (a safe assumption since the aircraft came to a stop on the runway after performing an RTO at Vr) then V1 would’ve been higher had it not been for reaching Vr first.

As long as the plane hasn’t passed the point at which it would cover more distance than the runway’s ASDA (Accelerate-Stop Distance Available) then ultimately I would think it doesn’t matter if you’re past V1 when it’s not the ‘true’ V1 per-se. In the end no one was hurt and the plane seems to be perfectly intact aside from the new engine they mentioned. Whether it was the correct decision is not for me to speculate, just offering an opinion as to why the flight crew did what they did.

That’s an excellent point, there is no evidence at the moment to prove they had reached V1 and given the length of the runway it’s not hard to imagine Vr coming before V1.

That’s an excellent point, there is no evidence at the moment to prove they had reached V1 and given the length of the runway it’s not hard to imagine Vr coming before V1.

Well technically they did reach V1 since V1 can never exceed Vr. Just that it certainly seems like, given the outcome, that V1 would’ve really been higher. The aircraft apparently wasn’t heavy enough or runway conditions bad enough to where V1 would’ve been below Vr. Otherwise a runway excursion would’ve almost certainly been the outcome.

I understand what you are saying, just clarifying it for other readers :)

I’m glad this post has made for some interesting discussion! Makes a change!

Problem spotted, possibly a little back pressure on the stick hence ‘perhaps’ nose wheel or possibly even main wheel lift off momentarily. Crew rejected believing they were still at or below V1.

I don’t think the crew would purposely reject above V1 as it would lead to a very interesting interview with management!

Edited to add, just re-read the incident and seems there was a little nose wheel ‘bounce’ hence ties in with the above.

If there was to be a catastrophic engine failure of any sort beyond V1 I continue my takeoff procedure and start worrying about the plane once I have maintained positive rate and am above V2, no if ands or buts…

Can no longer safely stop*

I say again, the plane could possible stop after V1 but it will not be a safe stop, tires will pop and brakes will melt. But the plane stands as we see from this example. If a 737 is on runway 07L at LAX at MTOW it can stop after V1, but the chance of a fire is extremely likely. Other large planes like 747’s 144’s 380’s can not stop because of either their weight and/or the speed they need to reach V1.

If the reporting is a reflection of the facts, I very much doubt the aircraft even hit 80kts.

This is the story in one quote:

"We were due to leave Birmingham Airport for Malaga at 7am on Thursday. But as the plane began to take off we suddenly came to an emergency stop. Everyone on board was very concerned, and a deathly silence fell.

We were told by staff on board that the engine overheated but that it was new and had only been installed on the plane yesterday. We were moved to another aircraft to continue the journey."

This just sounds like a straight forward RTO, that has been reported on a quiet news day in Birmingham…

I’m from Leicester and didn’t realise Birmgham had quiet news days! There’s always something going off there 😂😂

But on topic, I’m sure a report will be filed and the facts come to life.

I haven’t read any other articles, only this one, and based on this article alone I would just like to point out that it was a passenger who claimed the front wheel had lifted off. Hardly a credible source.

To make assumptions that the aircraft was past V1, let alone at Vr, or rejecting after Vr, are a bit premature, to say the least…