Taken before take off. Can’t remember my takeoff airport, but from the training server. Just to show the size compared to cars on the simulator. 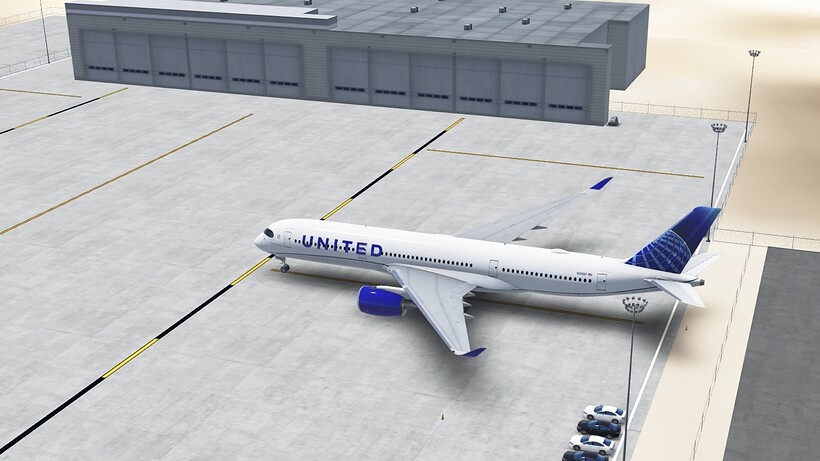 Lovely photo, however next time make sure to follow the rules for the #screenshots-and-videos category which can be found here:

The purpose of this category is to provide a place for all photos and videos taken/created by the community. Anyone can post in this category. As well as our Guide to the Community, the following rules apply within this category when posting: Only one topic can be made per photo group (e.g. event, flight, spotting session etc.) No more than one topic per day No more than 10 photos per topic All HUD views, sidebars, display names and boxes must be hidden It must not include any images that …

There’s nothing wrong with the topic.

If I’m correct, I do believe that there has to be a detail of the flight like ICAO etc etc since it’s mentioned when you select the category. I could be wrong so don’t quote me on it haha.

It’s not in the rules. Besides, OP stated the above anyway:

Taken before take off. Can’t remember my takeoff airport, but from the training server.

Screenshots should be in the respective category regardless.

…And it is. If you would understand the rules, you would see that.

The user posts a simple pic to “support” his topic called A350-900 Size and every response is too argue about where this should go !!!

This is so typical of IFC. Are you all little lawyers ?

This isn’t a “screen shot” topic , the subject is about the plane size. The single pic illustrates that point.

But next to the cars in your example it seems truer to scale. Is this your point ?

Now argue all day about my response …is it appropriate. Is too many words ?

I so agree, I get that people want to help moderate the community which I’m totally okay with, but it’s a little much when you’re criticizing a basic topic from a new member of our community. Enough is enough, let them play the simulator.

Its not about a screen shot ! It could have been about a landing gear issue and a pic inserted to show the problem .

I have belonged to dozens of forums over decades
about many things. This one spends more time discussing the forum itself than what the forum is to support.

Why do some of y’all care so much? If there’s an issue with the post leave it to a mod or a regular, which I seen none of y’all are. Nice photo OP!

For example just reminding someone who sended Screenshots of their flight is better to set it as screenshot topic is better then lecturing him, again this spoils the fun. And if you have the energy to lecture, or remind them, then also have the energy to answer on the topic itself because that isn’t polite. (this is just in general, I’m not pointing fingers)
And with reminding I mean politely reminding. You can speak with two words. The first one who replied in this post, I think it was @Adventures. Did a great job.

Sorry for the rant, but I had to say it in my opinion…

It’s crazy how pedantic some people are. Some people have nothing better to do than nit pick at ‘is it in the right category because of the camera angle or its a comparison’ etc. Get over it real airlines aren’t even this petty! Makes me laugh.
It’s simple - comment something positive or don’t comment, being so pedantic just puts people off posting!
Little lawyer club lol

The point of the post is / was; when you are flying these planes. You don’t truly understand their size. But when I seen this and was able to compare it to the size of a car… and that maybe people who use infinite flight that aren’t pilots or have never even flown on a plane would grasp how amazing it is that as a species, we can build things like this.

ps - if I put this in the wrong place, I put it in the wrong place. please forgive me as it was my very first post on this forum. And seeing as how everyone reacted over where i put it, was probably my last (other than this reply😅)