So, yesterday I went to Dulles to catch the first A220 to ever land in the DC area, a Delta A220-100 (CS100 as it said in front of the nose gear door) from Orlando. It was operating as a cargo flight for Delta, number DL8910. It was a guessing game for me, as there was no way to know until about 10 minutes from landing what runway she’d take, either 1R or 1C. I was between the spotting location for 1C/19C, Daily Parking Garage 2, and the spotting location for 19L, Daily Garage 1. I would have a hard time getting her if she went to 1R, but I knew that she would land on 1C for three reasons:

I heard on frequency that the pilot wanted to land on 1C, so my prediction was correct, and I ran up to the top of the Daily 2 garage (you can’t park in it because the number 2 garage is for employees only), expecting to see a lot of people like when I went to spot the AN-124 a month ago, only to find that my mom and I were the only ones there. We waited for a few minutes, and during those few minutes, I got pictures of some aircraft with my new Canon T7 Rebel with a 70-300mm lens.

N26FE, a Bombardier Challenger 300, banking left off of 1R to an unknown destination (possibly Memphis). 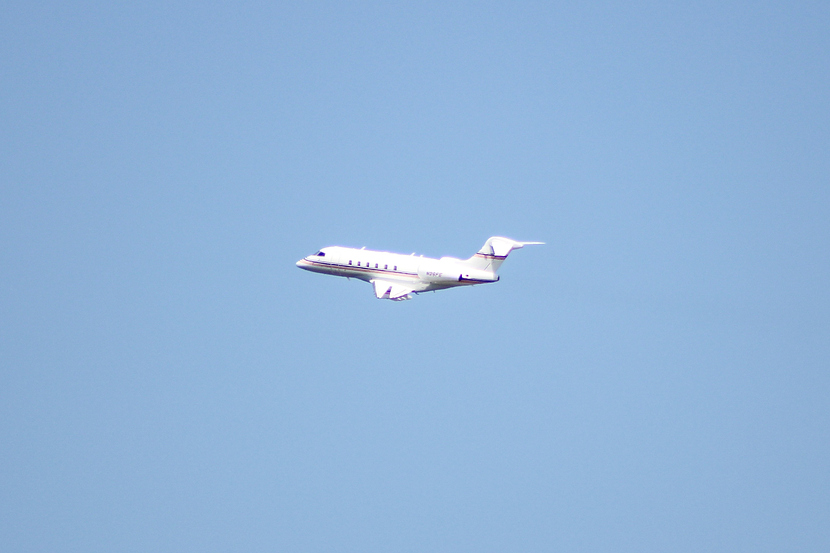 OE-LPD, a special Austrian Airlines aircraft in the ‘My Sound of Austria’ livery, loading up at gate B51 for flight OS94 back to Vienna 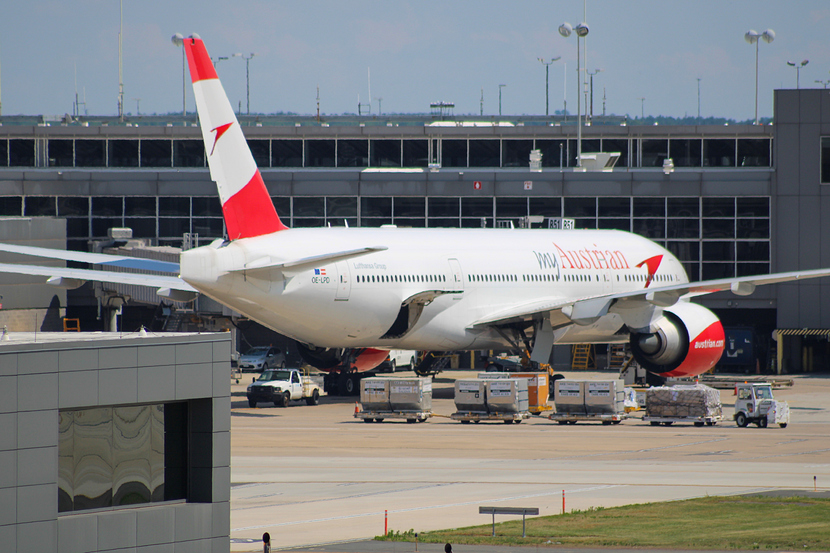 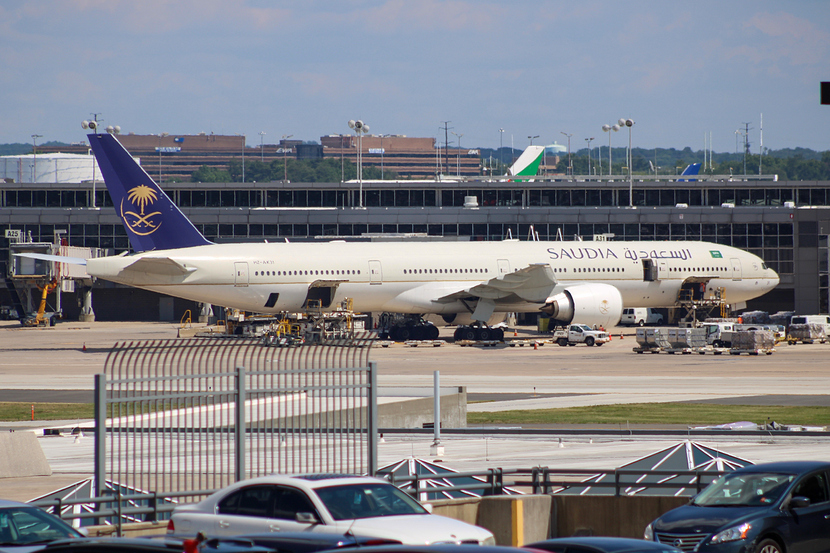 So, we waited a bit more, and finally, I saw the A220 in the difference. I was listening to the frequency when the A220 had just tuned into Approach, and the controller was confused by the callsign and aircraft type, with the Delta Airlines callsign, and an aircraft that he thought was a helicopter:

That last part cracked me up when I heard it. It was so random.

So, the aircraft touched down in the 95 degree heat, hence the heat haze from hell in many of these pictures. 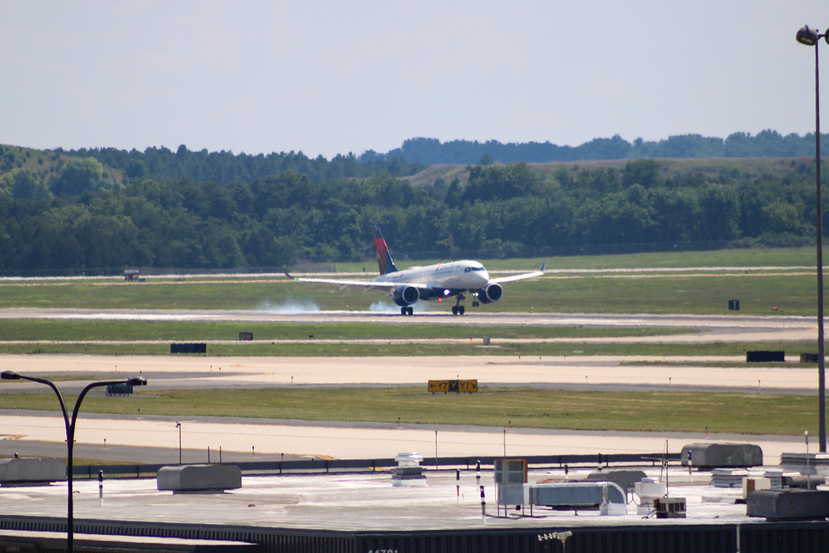 The aircraft passing by a large group of stored United 767s and 777s on an apron between 1C and 1L, as well as the weekly UPS 767 that stays parked for a couple of days at a time. 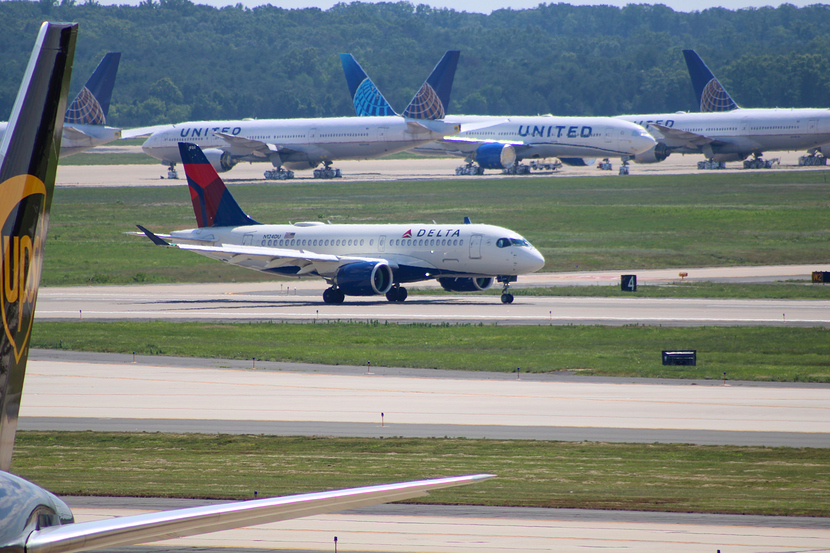 The aircraft, N124DU, perpendicular to me on top of the garage. 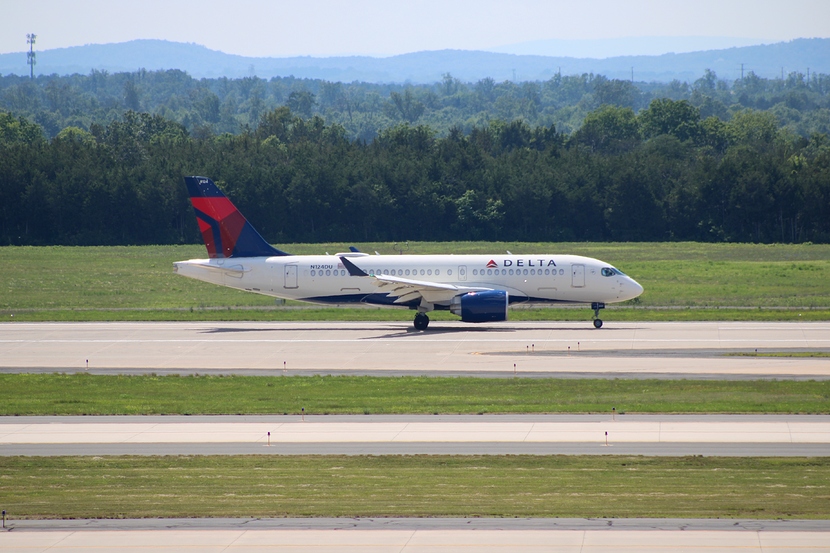 She is taxiing to the cargo apron as I thought! 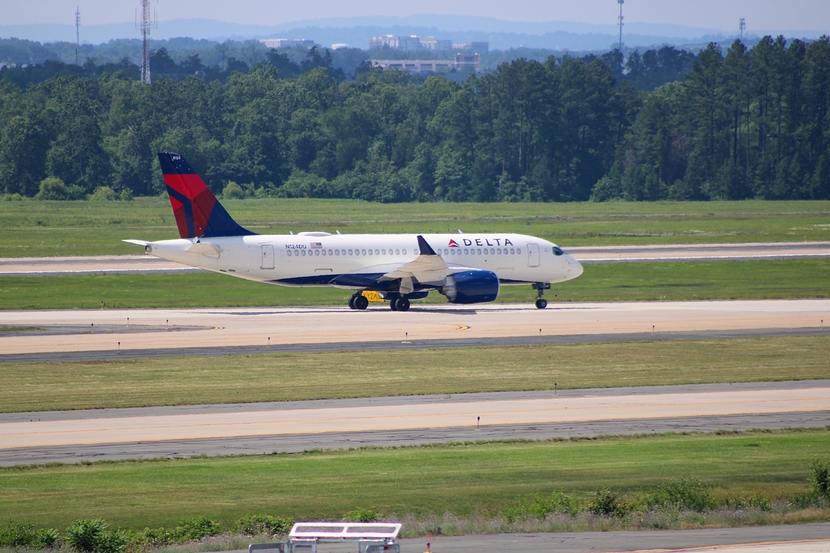 So, we finish on the top of the garage and walk back to my mom’s car, and I ask her to take me to a parking lot near the apron, with a fence between the two, and we park and I get to see her in all her glory from just a few feet away! Also one of the ground workers waved at me while I was taking pictures! 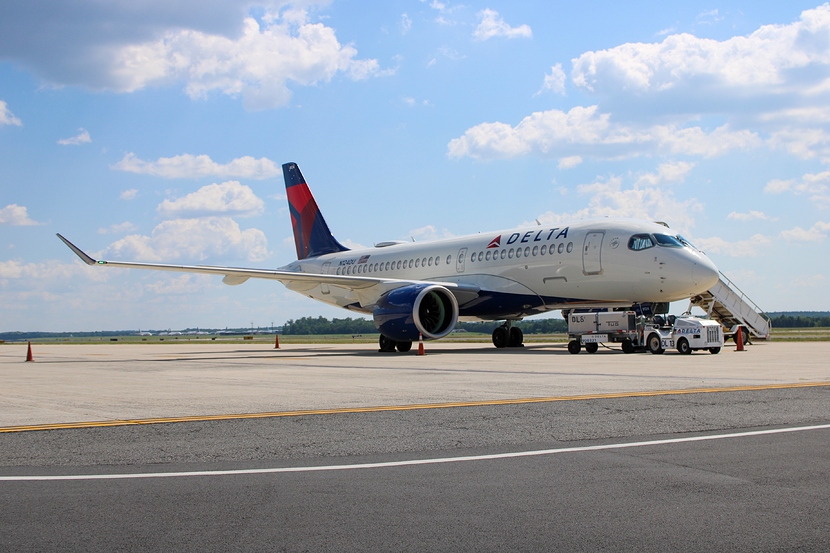 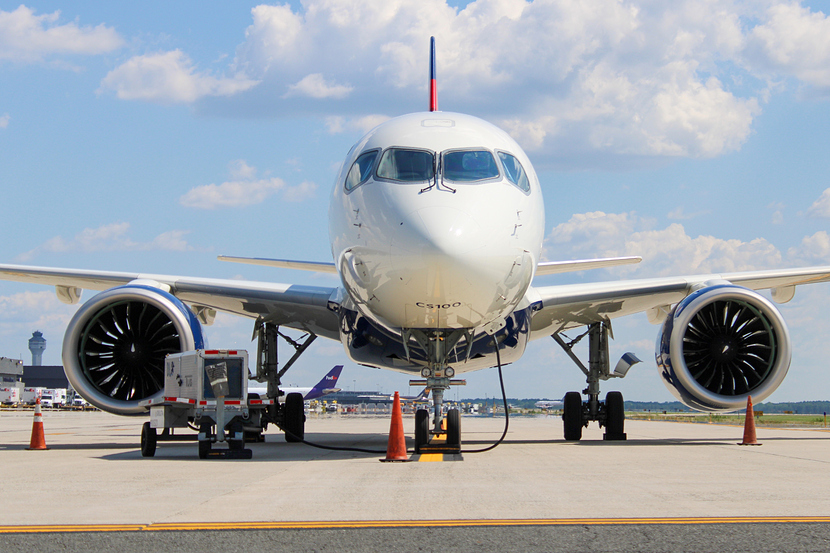 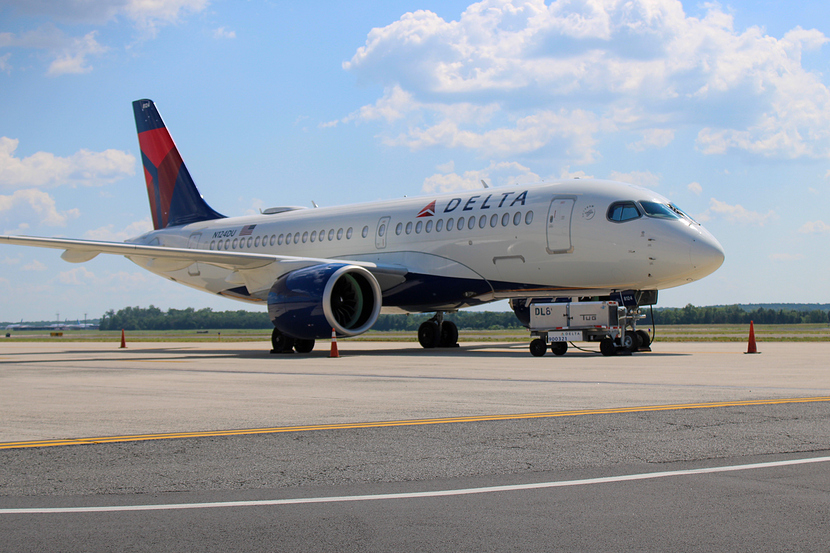 Please let me know which photo was your favorite! Also, are any of these ok for jetphotos? I know the first bunch are definitely not, but any of the photos on the ramp?

Also, please read all of the text, and not just look at the pictures. Thanks!

These are some great pictures and lots of information!

Unfortunately I think the second to last is the only chance. The others are backlit (so annoying) or have obstructions and poor quality. Second one has a thing in front of the engine and I’m not 100% if that counts as an obstruction. Great pictures just try not to get backlit

There was no way to not get backlit here. The only locations for spotting 1C/19C at Dulles are facing west, against the sun. Thanks for the feedback tho!

Gotta rise and shine for that location or find a different location for convenience. I’m sure IAD has other spots

I’m still trying to figure out how this is a freighter flight? Usually DL uses the 89XX callsigns for charters

Second to last is a no go unless you can convince them that the motive of the shot is to show that it’s connected to ground power, which you won’t be doing, so unfortunately it’s not going to make it.

What’s the f stop? Unless it’s some like f/10 beast you should be fine if you can bump the iso. 1/400, and even 1/800+ ss isn’t that hard to do on a sunny day, but a longer lense won’t fix the backlight, only a different time of day, or angle could do that…

Ya, on a sunny day you should be mostly fine exposure wise. Now, if it’s a lens where the apiture gets smaller as you go out, then like f/12 or something at 1/800/sec could be difficult on all but the sunniest of days. The backlit though won’t go away because you have a longer lens.

You can’t go wrong with the A220!! (And no I’m not an A220 fanboy, my dad instructs on it for Delta so I have a personal connection to it)

Really really cool pictures of my favourite airplane! Such a photogenic one! Also a hilarious ATC conversation you wrote about in the text and nice pictures of the Austrian and Saudis B777s as well.

Thank you! Glad you liked the ATC remarks!

And sorry to say, like @N1RG said, this isn’t cargo.

It likely came in empty from MCO and then took a sports team down there. These past few weeks Delta has been running several sports charters, with many flying under DL8910. 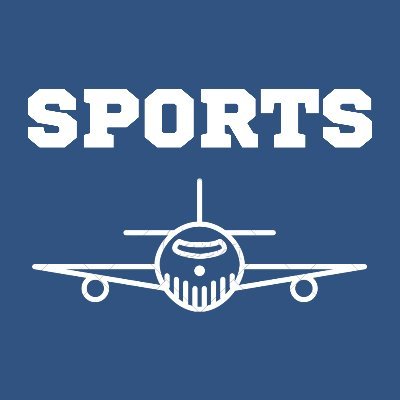 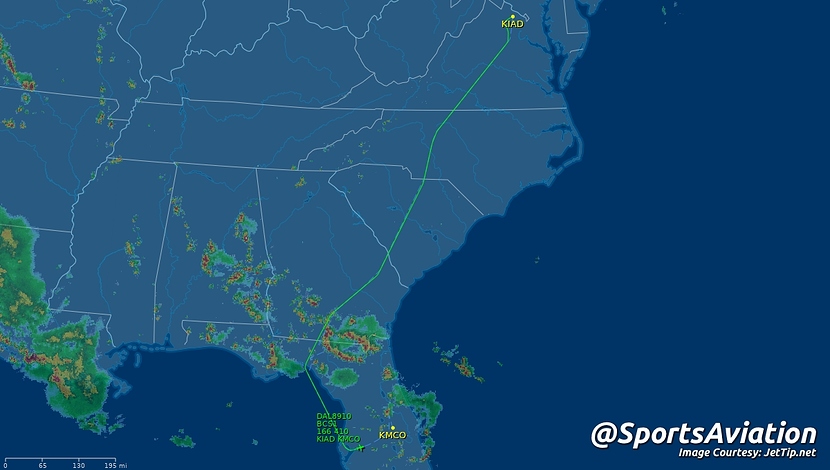 This aircraft was used to fly my beloved DC United down to Orlando for the #MLSisBack tournament. Great photos though! If you look carefully there are a lot of MLS teams arriving today:

That’s interesting, because when I got there, they were unloading some cargo boxes out of the aircraft. Guess it served both purposes?

Could just be transporting supplies for the team. All the players posted pictures throughout Instagram of inside the aircraft, and no cargo was onboard except team equipment.

That was for the return flight back to MCO. This was the day before, right as the aircraft got there. The world will never know (except the ground crew workers and cargo masters).