Hello IFC,
Ladies and Gentlemen, the moment you’ve all been waiting for is here. Everyone who had Infinite Flight back before Global remembers the significance San Clemente Island (KNUC) had on all members of the Community. Something about this single-runway island airport made it stand out in the SoCal region, and was a popular destination amongst all of the servers. Sadly, with the creation of global, this little island airport was mostly forgotten, remembered only by those who choose to remember it. Don’t get me wrong, what this game has become in the last couple years is simply amazing. However sometimes it’s important to step back, before we can continue to look forward.

That is exactly why I feel it is important to host this event. KNUC will be open for four hours, so that you may recreate some of your favorite SoCal Pre-Global routes.

Naval Auxiliary Landing Field (NALF) San Clemente Island (ICAO: KNUC , FAA LID: NUC ), also known as Frederick Sherman Field , is a military airport located on San Clemente Island, in Los Angeles County, California, USA. It has been owned by the United States Navy since 1937, but came into its current importance during the past decade. It is the Navy’s only remaining live fire range. San Clemente is the southernmost Channel Island, covering 57 square miles (150 km²). The island is approximately 21 nmi (39 km) long and is 4.5 nmi (8 km) across at its widest point. It lies 55 nmi (102 km) south of Long Beach and 68 nmi (130 km) west of San Diego, California.

One of the primary military functions of San Clemente has been to support research and development of many of the Navy’s weapon systems. In 1939, the Navy developed the first Landing Craft, Vehicle and Personnel (LCVP) “Higgins Boat” at SCI. This was the beginning of the Naval Amphibious Force, which was one of the key factors in the outcome of World War II. Today SCI’s primary function is twofold: (1) to support tactical training of the Pacific Fleet, and (2) to continue as a key research and development facility. SCI provides the Navy and Marine Corps a multi-threat warfare training range. A major part of Navy training takes place on the ranges right off the SCI shores. The primary range covers over 149,000 square miles (386,000 km²) and is the Navy’s busiest Fleet airspace. Also included in this training area are two mine exercise areas, the Southern California Anti-Submarine Warfare Range, seven submarine areas, the shallow water Undersea Training Range, and two laser training ranges. In total, SCI is a unique combination of airfields, airspace and ranges unlike any other facility owned by the Navy. It is the only location in the Pacific where surface ships, submarines, aircraft and Navy expeditionary forces can train in all warfare areas simultaneously using shore gunnery, bombardment, air defense, anti sub and electronic warfare

Naval Auxiliary Landing Field (NALF) San Clemente Island (ICAO: KNUC, FAA LID: NUC), also known as Frederick Sherman Field, is a military airport located on San Clemente Island, in Los Angeles County, California, USA. It has been owned by the United States Navy since 1937, but came into its current importance during the past decade. It is the Navy's only remaining live fire range. San Clemente is the southernmost Channel Island, covering 57 square miles (150 km²). The island is approximately 21 n...

Other Info: We will have KNUC TGA open for four hours. There is no forced start or end time. You are welcome to drop in and start or end your flight at any point within that time period. Also please note that there will be special rules in place regarding aircraft spawn-ins, due to limited space. See NOTAM tab for that information.

Although you are allowed to fly from anywhere into KNUC and vise-versa, I have some pre-established common pre-global routes, that were very common to see in SoCal

NOTAM : All ghosting rules and procedures will be in effect except for aircraft size restrictions. Although the parking spaces do not accommodate larger aircraft, the runway and taxiways do. Also, please do not worry if you spawn into another aircraft. Due to the size of the apron, we will not ghost for taxing though other aircraft (in the apron only) In pre-global, spawning in other airplanes was quite common.

Please, no loitering. Due to lack of spawn space, please limit your time in the apron so others may park or spawn. Please have flight plans ready prior to spawning. Your community members will appreciate it!

(this concludes the NOTAM)

ATC - IFATC is likely to provide services during the event. I know I myself will likely work the first hour it is open. If any other IFATC would like to also work the event, please contact me via the IFATC Slack.

Other than that, that’s about it! If you have any questions, please don’t hesitate to reach out below or via PM. I hope you all enjoy this little blast from IF past! I also encourage you to share any pictures you have of you flying at KNUC during pre-global or now!

The following pictures were taken by me:

I also encourage you to check out the video below, made by the Infinite Flight YT channel back in 2016! 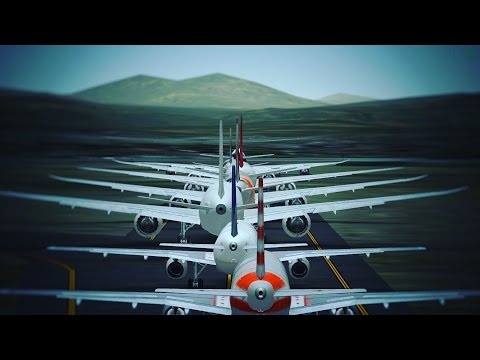 Hey Guys! The IFATC schedule for this event is now complete!

Hey all! Just wanted to let y’all know the event is THIS SATURDAY. Don’t forget!

Hey @Thunderbolt what did you fix?

Hey all! The IFATC schedule for this event is published!

Nice to be there!

Hey All. The event is today! I hope you can all make it!

Hey all! The event starts in one hour! I really hope you can all make it, and enjoy this little blast from the past!

The event is now active!! Come and check it out!

Thank you all so much for coming. It really became a great event! Let me know what you thought, at what could’ve been better for next time!